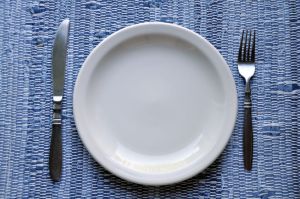 This week a couple articles about “gambling while hungry” have been kicking around the web. The topic caught my eye, because occasionally I’m asked what the best breakfast is when sitting for the GMAT exam and I’ve always had a habit of “working hungry.”

First, some comments and questions:

I have found that a little hunger keeps me alert and focused. Not “emotionally hot”; I have no clue what that’s about. I have always preferred to take high-stakes exams in the morning and without breakfast. If I had to take the GMAT this week, I would take it in the morning and while hungry. I’d drink coffee before the exam – though I had this habit before I had the coffee-drinking habit – and eat an apple during the break. Certainly it can be distracting if you get ravenously hungry, but I’d rather have a growling stomach than be drowsy.

Caveat: I don’t think this technique will necessarily work for everyone merely because it works for me. I would encourage people to experiment during low-stakes settings. It’s worth figuring out, since it’s the kind of practice that can reap rewards over time. But other answers to this question usually seem to be simply made up based on preconceived ideas about nutrition, rather than derived from practice. What has been the state of your stomach during high and low cognitive performances? For example, although coffee works for me now, one of the worst exams I ever took in college was disrupted partly by caffeine jitters (and more by a complete lack of preparation), because I drank coffee rarely then.

This article is part of the email series, The Leader’s Brief. You can subscribe for email updates at www.theleadersbrief.com.