GMAT Practice Tests, Free and Paid: How Many to Take and How to Use Them

Practice tests are major milestones of your GMAT preparation, since they are the most realistic practice format possible (aside from taking the GMAT once as a form of trial, which is not advisable when you have practice tests at your disposal). So, when you think about practice tests, you should view them in the context of your entire GMAT plan, as discussed in a following chapter of this course. But, for the moment, we will focus on the popular and important topic of practice tests—how many to take, what they are good for, and what misconceptions we may need to discard. 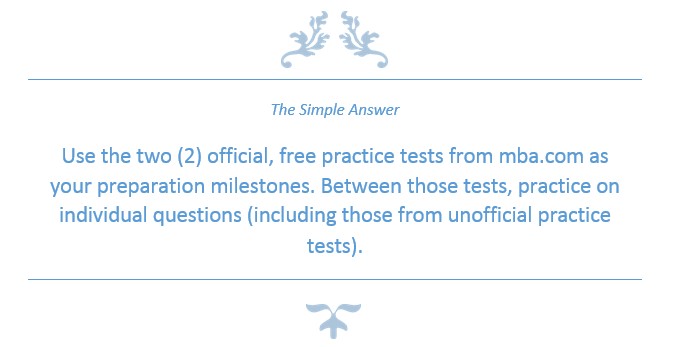 The maker of the GMAT is the organization known as the GMAC (the Graduation Management Admission Council), and the official website of the organization and the test for people applying to business school is mba.com. On that site, you can download the software for the two (2) GMATPrep tests. Those are the only two practice tests published by GMAC, the maker of the GMAT. Also, although you can run them on your computer in the comfort of your home or wherever, the GMATPrep practice tests are adaptive in the same way as the GMAT itself. They are free and they provide a highly realistic experience of the exam (if you manage to take them free of cellphone and human distractions).

Unofficial tests are not highly scientific, and like an ill-fitting running shoe or an untested nutritional supplement, an unofficial GMAT test may even do you more harm than good. I want to be careful and clear that I am not maligning any company or its practice resources here, because I truly believe that most GMAT preparation resources are of decent quality (if a bit convoluted and overpriced). Nevertheless, there is an inevitable difficulty in building unofficial GMAT practice tests, and that difficulty will inevitably impact your practice.

Let me describe the situation from the perspective of the people who have to make unofficial practice CATs. (If you don’t know what at “CAT” is yet, don’t worry; that’s coming soon. The short answer is that a CAT is a test that adapts to your performance along the way, as the GMAT does.) I have lived through this perspective personally, because for years I was responsible for the care and development of the unofficial practice CATs provided by Kaplan GMAT. The problem is the following: the GMAC, the makers of the GMAT, don’t reveal, publish, or say any specifications for the test. The GMAC, for example, doesn’t explain how its algorithm works. The GMAC is a fine organization, and test preparation companies do have a healthy relationship with the company, and I’m not even suggesting that I would do anything differently if I were responsible for this kind of decision at GMAC. But the fact of the matter is that, even though I’ve been invited multiple times to meet with GMAC and discuss with the test and ask questions, most of those questions go unanswered. That’s why all practice tests other than the two official practice tests are reverse-engineered.

What’s the consequence? As we’ve said in an earlier chapter, the standard error on the GMAT itself is already 30 points. And while the GMAT is a well-constructed test, arguably one of the best in standardized aptitude tests, 30 points is not trivial when the difference between Stanford and UCLA (both excellent programs, in my opinion, but as statistics show, but of definitely unequal popularity in terms of application numbers) is only 20 or 30 points. And if the actual test has a standard error of 30 points, what do you think the smallest standard error of a reverse-engineered test could possibly be? Admitting, say, a little error for miscalibrated questions, a little for a miscalibrated test algorithm, a little for a smaller-than-ideal pool of test items (questions)—maybe 60 points? Compounding these considerations is the plain fact that it’s difficult to take a practice test and not take the score to heart. If you score well above your goal, you will rejoice, if you score well below, you will lament, and these reactions can be devastatingly distracting if they are misinformed.

A good time to use unofficial practice tests is if you have exhausted this free online course and wish to continue to practice on your own. In such a case, I would recommend buying the latest Kaplan GMAT premier book and one of the Manhattan GMAT books, as you’ll get about 6 or so tests with each book. But don’t use those tests as milestones. Your first big milestone should be the first GMATPrep test from mba.com, and your second big milestone, before the test, should be the second GMATPrep test from mba.com.

Since you might recall that I used to be part of Kaplan, and you might know that Manhattan GMAT is owned by Kaplan, I will point out that I and this website/company are not affiliated in any way with Kaplan. My experience has simply led me to believe that those unofficial tests are much better than the other ones, although, as you’ve heard at length, I do not highly recommend the unofficial tests in general.

That’s it for this chapter. If you have questions, they may be answered in one of the following chapters of this free course, and/but you are also free to contact us with your question.