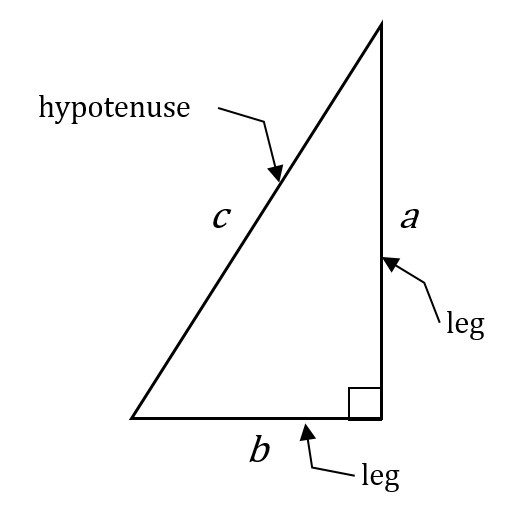 Either of the legs can be considered a base and the other leg would be considered the height (or altitude), because the right angle automatically makes them perpendicular. If the lengths of both the legs are known, then by setting one of these sides as the base b and the other as the height h, the area of the right triangle is easy to calculate using the standard formula for a triangle’s area: 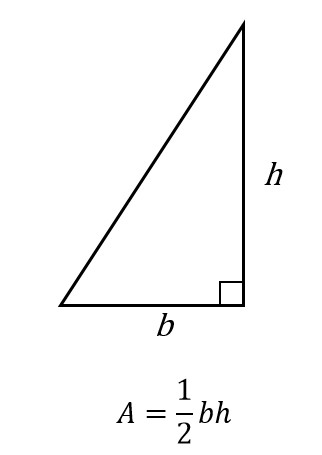 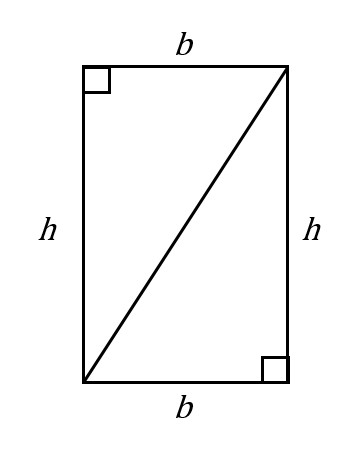 The Pythagorean Theorem states that, in a right triangle, the square of the length of the hypotenuse is equal to the sum of the squares of the lengths of the other two sides. 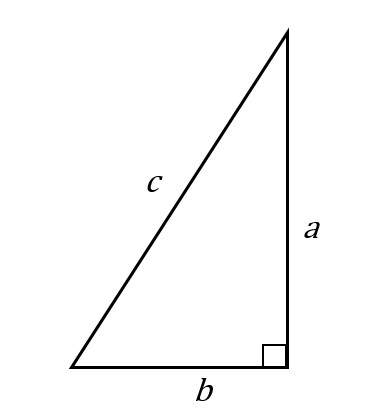 The sides that we referred to as b and h above are now labeled as b and a, since the custom when using the Pythagorean Theorem is to employ the variables a, b, and c. Nevertheless, it’s important to recognize that both formulas refer to the same sides. For example, on a typical GMAT question you might use the Pythagorean Theorem to determine the base and height of a triangle and then ultimately find its area.

Quite frequently on the GMAT, you will find yourself in a situation in which you know that a particular triangle is a right triangle, and you will know the lengths of two of the three sides. You will then be able to find the length of the third side by plugging the two known lengths into

Earlier, we’ve discussed how the Pythagorean Theorem can be used to compute the distance between any two points in the coordinate plane.

Certain trios of numbers that satisfy the Pythagorean Theorem appear often on the GMAT. You should memorize at least the first three triples here. You don’t need to know the angles of these triangles, only the ratios of the side lengths:

Insofar as a right triangle is a special triangle, the 45-45-90 triangle is doubly special. All of the general triangle rules apply to it, the Pythagorean Theorem applies to it, and then it has some special properties of its own. 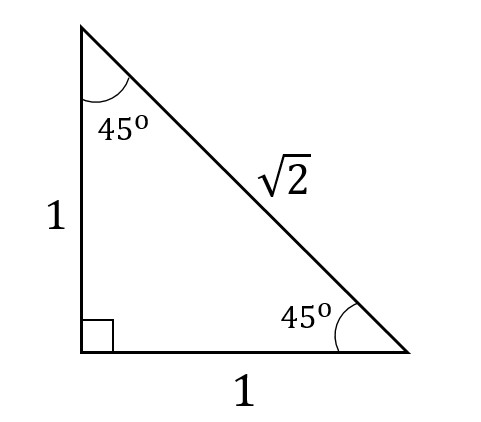 A 45-45-90 triangle is what you get when you have an isosceles right triangle. If a triangle is a right triangle and it’s isosceles, then the two sides other than the right angle must add up to 90 degrees and they must be equal, so each must equal 45 degrees.

Furthermore, since it’s a right triangle, we know that

is true, but if a = b (because we are talking about an isosceles triangle), we can substitute that into the Pythagorean Theorem to get:

The ratio of sides does not mean that the sides opposite the 45 degree angles are necessarily equal to 1, as they are above. Rather, whatever length is across from 45 degrees, call it a length of x, will be accompanied across from the hypotenuse by a side that is √2 as big, or x√2. 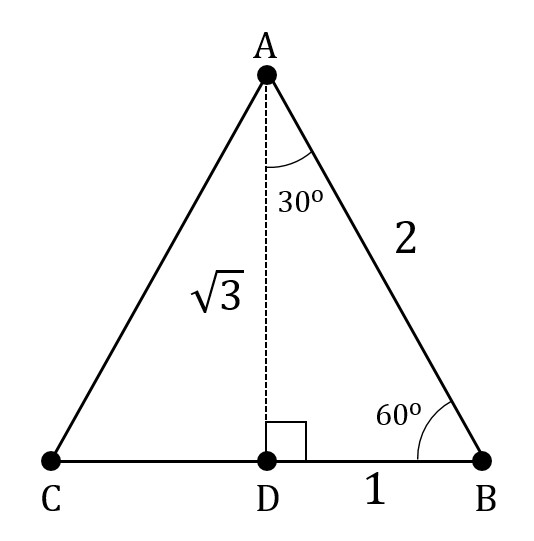 A 30-60-90 triangle inside an equilateral triangle

If we try plugging these lengths into the Pythagorean Theorem, we obtain the following:

Our result confirms that the theorem is true – as it had better be, since we are dealing with a right triangle.

You do not need to know trigonometry for the GMAT. Remember sines, cosines and tangents of angles? Maybe you do and maybe you don’t, but you don’t need to know them for the GMAT. And, if you have studied these subjects and they are fresh in your mind, don’t be tempted to try to use them. Rather, look for another method to approach geometry questions using the material in this summary.

Decline in a Road:
http://www.gmatfree.com/decline-in-a-road

Perimeter of a Right Triangle:
http://www.gmatfree.com/perimeter-of-a-right-triangle