Before we discuss the other quadrilaterals, here are the basics about rectangles and squares tested on the GMAT. We know the shape below is a rectangle, because it has four right angles (indicated by the square symbol in the angle): 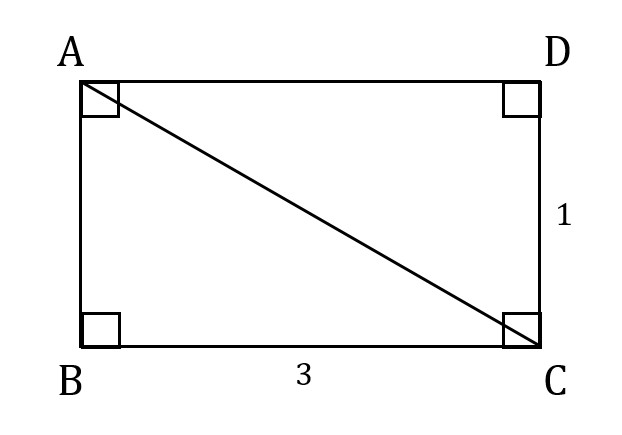 On the GMAT, we cannot assume that a particular angle is a right angle just because it looks like 90 degrees. However, we can sometimes infer that we are dealing with a rectangle without being told every single angle. Since the angles sum to 360 degrees, as they do in any quadrilateral, we can write an equation of the angles:

If we knew only that angle ABC and angle BCD were both right angles (that is, if we knew less than in the figure above), then the equation would simply be:

We can’t be certain that we have a rectangle from this information: the final two angles could be right angles or sum to 180 in a different way. However, if three angles are each known to be right angles, then we are left with one equation and one unknown, and we know we are dealing with a rectangle.

In the rectangle above, the length of the diagonal is equal to

using the Pythagorean Theorem. Every rectangle contains two identical right triangles formed from its sides and its diagonals. And in the case of a square, those two triangles are 45-45-90 triangles.

The area of the rectangle above is

and its perimeter is