As we have seen, all linear equations represent lines in the coordinate system. Quadratic equations have their own characteristic shape, a parabola: 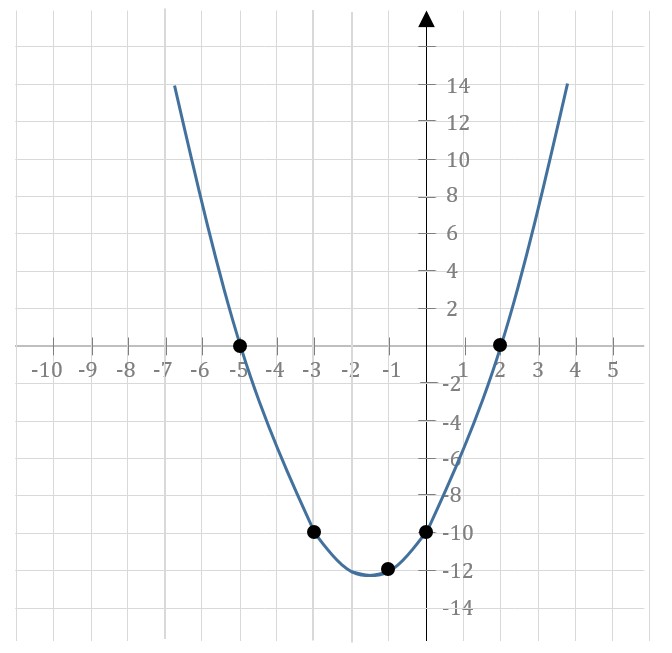 The graph of the quadratic equation

can be sketched approximately by hand
by identifying various point values

The two points at which the parabola crosses the y-axis are significant. If you are given a quadratic equation and you need to solve for x, there will be either 0, 1, or 2 solutions – the points on the graph where y = 0.

Solving a Quadratic by Factoring

Let’s use factoring to solve this quadratic equation:

To factor it, we must get it into the form:

To check that we have factored correctly, we could expand the parentheses back out with FOIL to get the expression we started with:

Back to the factored expression: we know that in an equation the left side is always equal to the right side. And in this case the right side of the equation is 0, so from that we can conclude the term (x + 3)(x – 1) must equal to zero as well. And that means that either (x + 3) or (x – 1) must equal zero. That’s key: when we factor a quadratic that is equal to zero, one term or the other must equal zero. Not convinced? Remember (x + 3) and (x – 1) are just numbers. Can you find two non-zero numbers which multiply to make zero?

Here is another example. In this case, we can factor simply by removing an x, so we don’t have to reverse-FOIL:

Sometimes the roots (solutions) of a quadratic equation cannot be obtained by simple factoring. In such a case, we can solve the equation by using the quadratic formula. Note that this situation is rarely seen on the GMAT: you should always try factoring first. In fact, you can safely ignore this subsection until your Quant performance is very strong. Because of the adaptive nature of the test (see the online course unit “The GMAT Exam” at www.gmatfree.com/the-gmat-exam/ for more on that), you won’t otherwise see a question that tests this knowledge.

Given that a quadratic is in the form,

the quadratic formula gives the two roots as:

This formula gives us the roots of the quadratic (as equal to x) when we put in the values of a, b, and c in a particular quadratic equation. For example, for

we can see right from the coefficients that a = 2, b = 8, and c =2. Plugging these values into the quadratic formula, we get:

There is a plus/minus in the solution, so we have two possibilities. Either:

There is a special part of the quadratic formula, the portion in the numerator:

The fact that this expression is “plus or minus” in the formula is why there are typically two roots: one root is generated from the plus and the other from the minus. So, the reason that some quadratic equations have only one root is that this term can be zero. For those quadratics,

This expression is known as the “discriminant” of a quadratic:

The discriminant allows us to determine whether a quadratic has zero, 1 or 2 roots. For example, if you get a quadratic like this,

you know that it has only a single distinct root, because

Since the discriminant is zero, there is only a single root to the equation. In this case, the single root happens to be

as you can find by completing the formula.

And you can actually do something similar with a quadratic like this:

The discriminant is negative, because

Other Solution of a Quadratic Equation:
http://www.gmatfree.com/other-solution-of-a-quadratic-equation