The multiples of 4 are:

and the multiples of 6 are:

Common multiples of 4 and 6 are simply the numbers that are in both lists:

Finding the LCM by Prime Factorization

Example: Let’s find the value of LCM(8,9,21). First, find the prime factorization of each of the numbers:

The LCM will be the product of each prime number taken to the highest power that it appears in any of the numbers in the set. For example, for LCM(8,9,21) to include 8 as a factor, it must include at least three 2’s as factors. Thus,

This method can be illustrated using a Venn diagram. In another example, let’s find the LCM of 48 and 180. First, again, we find the prime factorizations of 48 and 180:

Then, we can put the prime factors into a Venn diagram with one circle for each of the two numbers, and all factors they share in common in the intersection. We get the following diagram: 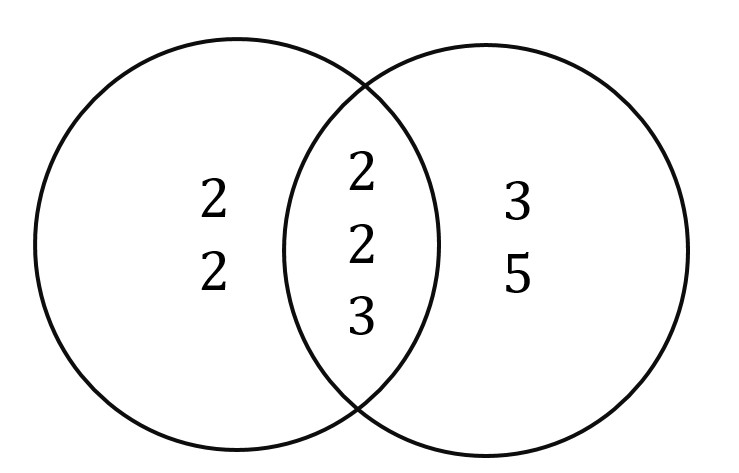 The LCM is the product of all of the numbers in the diagram. This diagram also shows us the greatest common divisor (GCD) between the two numbers. The GCD, which is the biggest number that will go into 48 and 180, is the product of the intersection of the prime factors. Thus the GCD of 48 and 180 is 12. The LCM is the union of the sets; the GCD is the intersection. We will discuss unions, intersections, and Venn diagrams in more detail later in this book.