A factor of an integer n is any number that “goes into” n without remainder; n can be divided by it without a remainder.

For example, 6 is a factor of 12 because

Indeed, any multiplication can be thought of in the terms,

Accordingly, the number 4 is not a factor of 13 because 4 cannot multiply any other whole number and come out with an even 13.

Every number has itself and 1 as factors. For example, 12 and 1 are both factors of 12. In some cases, a number’s only factors are itself and 1; such numbers are prime numbers, as we will discuss below.

Divisibility rules are technically not required knowledge for the GMAT, but they are quite useful. A divisibility rule allows you determine, without actually performing the division, whether one number is divisible by another.

Here are some divisibility rules:

If you have fallen in love with these rules and want to learn as many as possible (that might sound odd, but I’ve seen it happen), there are many to learn, such as on the “Divisibility Rule” page on Wikipedia. However, you don’t really need any rules beyond the above, even for a top Quant score. That’s true in part because the most powerful technique to understand factors is to use prime numbers, as we’ll now discuss.

An integer is called “prime” if its only factors are 1 and n. The prime numbers begin with 2:

Since “1 and n” are not two different numbers when 1 itself is n, this definition does not apply to the number 1 and 1 is not considered a prime number.

There are infinitely many primes. How soon the next prime number comes after a given prime number is generally not obvious.

Notice that 2 is the smallest prime number and the only even prime number. You will use this fact on GMAT questions.

On some GMAT questions, you will have to determine whether one or more numbers are prime. Here is the simplest method. The idea is that you try to show a number is not prime until you have run into a wall and the only possibility left is that it’s prime.

To determine whether a number n is prime:

4. …until you cross the “middle point.” You will know you are finished when you reach a “middle point.” There is a middle point close to the square root of n. After you pass it, you are just trying combinations of factors that you have already tried.

Why, when we are testing the factors in ascending order, do we have to try only the prime numbers? The reason is that, in testing the primes, we also test the non-primes. Take 6, for example. If we have already tried 2 and 3 as factors, we don’t need to bother trying 6, because 6 is simply 2 times 3, and if neither 2 nor 3 is a factor, than they certainly aren’t both factors, as would be required for 6 to be a factor.

Every positive number can be factored into a product of primes. For example,

What, then, is the prime factorization of 100?

We’ll now discuss how to find any number’s prime factorization.

If you take a number and divide it into factors, and keep dividing its factors until you can divide no further, you will end up with the original number’s prime factorization. The successive divisions can be depicted as a “tree,” and the prime factorization of the original number will be the product of all the numbers left hanging at the end – the “leaves” of the tree.

For example, to find the prime factorization of 42, you might start by dividing by 2. That will give you this factor tree: 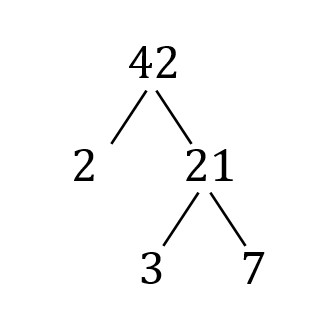 If you had started by dividing 42 into 6 and 7, you would have gotten a different tree, but the same factorization: 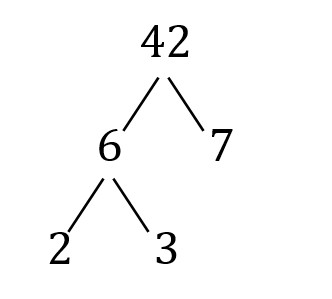 Factor trees are quick and easy to sketch. Make use of them on your noteboard when doing GMAT questions. You want to avoid trying to do too much of a GMAT question in your head, leaving yourself open to preventable errors.

How to Determine the Factors of a Number

Let’s discuss two ways to determine all the factors of some number n. It would be quite normal for a GMAT question to ask you to do this.

Testing Factors from 2 to the “Middle Point.” The first method, the simpler one, is a lot like the method above to determine whether a number is prime. You start with 2, attempting to divide into n as you go up, until you reach the “middle point” for that number. However, since you care about all factors, you try all integers, not just prime factors.

Forming Combinations of the Prime Factorization. The second method, which is more powerful but trickier, is to start by finding the prime factorization of n. In the case of 42, we have 42 = (2)(3)(7). Those three factors are like the “atoms” that make up the product 42. All possible factorizations of 42 must contain exactly those factors – no more, no less. So, if we exhaust the ways that 2, 3, and 7 can be divided into two numbers, we obtain all the factors of 42.

This method might be useful if you are asked (on a pretty difficult question) to determine how many factors a very large number has. On such a question, factor math meets the math of counting methods and combinations, discussed near the end of this book.

Answer: No. The number 6 is not a factor of 20 because 6 does not go into 20 without a remainder; it goes in three times with a remainder of 2.

Answer: The factorizations of 20 are: