The diameter is a line segment that connects two points on the circle and goes through the center. It is always equal in length to two radii. 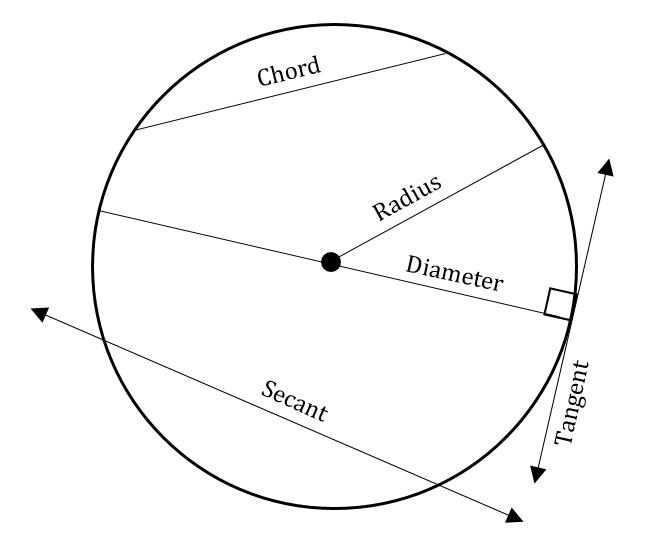 The figure above shows a circle with a diameter and a radius (of infinitely many possible diameters and radii) shown. The figure also shows a chord, a secant (which is quite similar to a chord), and a tangent line. For the GMAT, the only key facts about these other lines are:

The area of a circle is given by the equation:

where r is the radius of the circle.

Here, pi is the constant number represented by the Greek letter pi equal to approximately 3.14. The number pi, like any irrational number, consists of an infinite number of non-repeating digits. (Once, for amusement, I memorized the first 1,000 digits of pi. I would wager that you could do it, too, given a month or a couple of months!) For the GMAT, you need only remember that

No further precision will ever be needed of you. Furthermore, answer choices will quite often be expressed in terms of pi, and in that case you will never need to express pi in digits but rather can work with it as a symbol. For example, if the radius of a circle is 4, then its area is

where d is the diameter.

That latter equation gives us a classic way to think about pi: if we rearrange it, we get

In other words, pi is the ratio of circumference to diameter of any circle. If you are bothered by pi, finding it a bit too mysterious, that fact may help to lessen the mystery (although pi is certainly mysterious and crops up in other strange places in mathematics, though these are not present on the GMAT).

The figure below shows a circle with radius r that has been partly shaded. The shaded region is demarcated by two radii with an angle of θ (this is the Greek letter theta) between them. In such a figure, θ is a central angle and L is an arc spanning that angle. 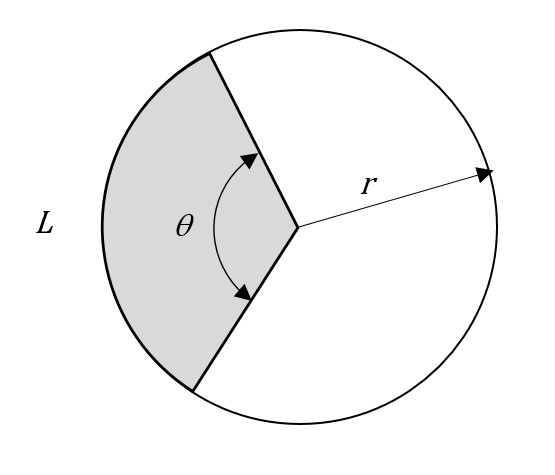 and the area of the sector is 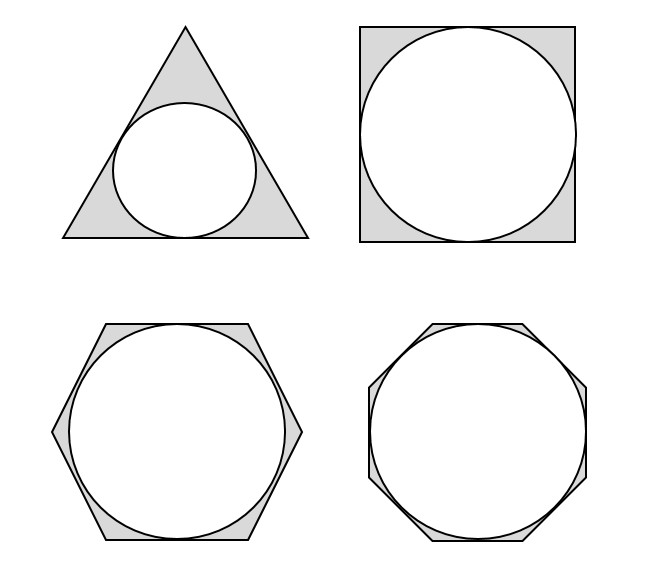 and hence s = 3. Since the figures are inscribed, s is equal to the diameter of the circle. Therefore, the circumference of the circle is

To be able to draw this conclusion, we have to equate s and d, and to do that use the fact that the circle is inscribed in the square.

Right Triangle Inscribed in a Circle

There is another, often overlooked, fact about inscribed figures that you must know for the GMAT. If a triangle is inscribed in a circle such that one side of the triangle is a diameter of the circle, then that triangle is a right triangle. This fact is called Thales’ theorem.

The converse is also true: if a right triangle is inscribed within a circle, then one of its sides passes through the center of the circle and is a diameter.

The theorem is summarized by the following diagram: 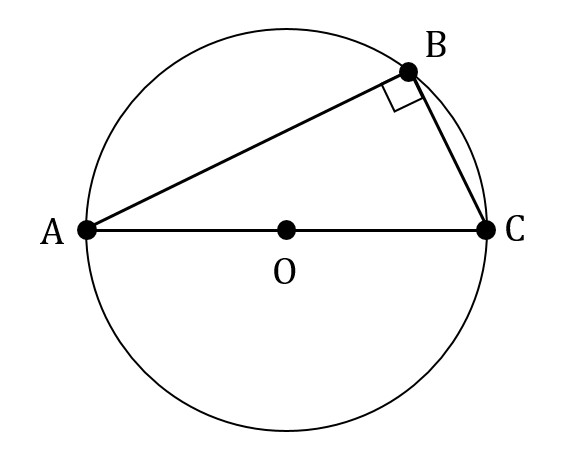 In other words, if we are given the figure above and told that O is the center of the circle and that AC passes through O, then we would be able to infer that ABC is a right triangle even without the right angle marking in the diagram.

You do not need to know why Thales’ theorem is true for the GMAT. However, you may be annoyed at not knowing why it’s true. The crux of the matter is that, in the figure above, OB is a radius of the circle. Since OA and OC are also radii of the circle, that means that AOB and COB are both isosceles triangles. From that, writing equations for the angles of these two triangles, you can prove that angle ABC = 90. Again, you don’t need to memorize the proof for the GMAT. The type of reasoning that is used in the proof, however, is typical of what you have to do on GMAT geometry questions: you find new uses and connections between different geometric facts, which, in this case, are the definition of the radius and diameter, the fact that triangles’ angles add to 180 degrees, and the fact that equal sides in triangles face equal angles.

Angles and Fractions of a Circle:
http://www.gmatfree.com/angles-and-fractions-of-a-circle

Circle in the Coordinate Plane:
http://www.gmatfree.com/circle-in-the-coordinate-plane