Descriptive statistics are measures of a population or data set. In other words, you have a group of numbers, and the statistics tell us about that group – what the values are clustered around or how tightly they are clustered, for example.

The descriptive statistics most commonly tested on the GMAT are the three main types of average, more formally known as “measures of central tendency”: the arithmetic mean or common average, the median, and the mode. We’ll start with a discussion of the mode.

For example, if there are seven 12-year olds in a class, ten 13-year olds, and four 14-year olds, the mode is 13, since there are more 13 year olds than any other age. A mode is similar to a plurality in an election or vote; the candidate who gets the plurality or most votes wins in a certain election format, even he or she doesn’t get the majority (over half) of the votes.

Here’s another example. Suppose that we tally the age to the nearest whole year of a class of children and we get the following result:

Here is a histogram of the data: 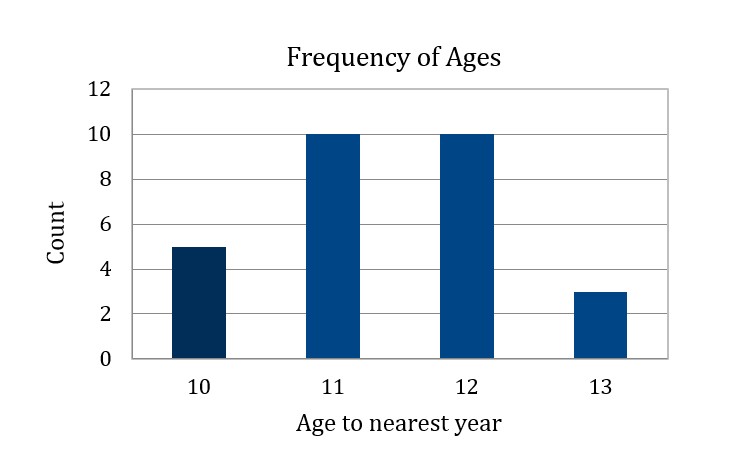 Here there are two modes: 11 years and 12 years. A list of numbers may have more than one mode.

For example, consider the data in the table and histogram. There are 28 children in the classroom. This is an even number of values, so the median will be the average of the middle two values–the 14th and the 15th values. Both of these values are 11, so the median of the children’s ages is 11.

To find the median, we generally have to put the elements of the set in order first – and count them, if we don’t know the number of elements in the set.

No GMAT question will ever refer to simply an “average,” leaving you to guess what it’s talking about. If a question concerns the arithmetic mean, it will generally use the phrase “average (arithmetic mean).” This average is the sum of all values divided by the number of values:

Consider the data in the table and histogram above. To compute the arithmetic mean of the children’s ages, we find the sum of the ages in years for this class, which is 319. The total number of children is 28. So we divide 319 by 28 to get the mean age:

Understanding weighted averages will help you solve some GMAT questions that specifically deal with an arithmetic mean and also some probability questions.

The weighted average is similar to the arithmetic mean. When totaling the individual values, each is multiplied by a weighting factor, and the total is then divided by the sum of all the weighting factors. These weighting factors allow us to count some values as “more important” in finding the final value than others.

Let’s say we have two classes, one with 20 students, and one with 30 students. The grades in each class on a particular test were:

To find that the overall average, we can to total all the grades and divide by the total number of students:

Or, we can compute weighted average of the two class means already calculated, using the number of students in each class as the weighting factor:

The fractions are simplified by factoring out and canceling 0.5:

The fractions are not too hard to work with, but this computation is easier using decimals:

As you can see, there are many ways to work with the average formula. With practice, you’ll use the fastest method for a given problem. Which brings us to a powerful method…

The “Balance” Concept in an Average

The example of morning and afternoon classes above demonstrates the concept of “balance” in an average (arithmetic mean). The averages of the two classes were 80% and 90%, but the overall average was not 85%, because the afternoon class had more “pull” in greater numbers.

In fact, such a “tug of war” goes on whenever there is arithmetic mean. The differences from the average always sum to zero.

To see how useful this fact can be, consider an example. Suppose that 14, 20, and x have an average (arithmetic mean) of 16. We can know in a heartbeat that x = 14, because the differences from the average always sum to zero. The difference from 14 is -2 and from 20 it’s 4. Those differences add up to two, so x must have a difference of -2, and therefore it’s 14.

Ratio of Mean to Median:
http://www.gmatfree.com/ratio-of-mean-to-median