Even if you are a standardized testing pro, you should give yourself at least 2 weeks to familiarize yourself with the GMAT before sitting for it. At the other end of the spectrum, some GMAT test takers end up preparing for the exam for a year or longer. There’s no need to plan to take that long, however, since you want to plan for a “one-and-done” experience. All in all, depending on your level of confidence, you should start with a plan of two weeks to two months.

To elaborate, I’ll share my personal story, then cite a couple relevant statistics, and then wrap up by comparing my advice to other peoples’ advice. 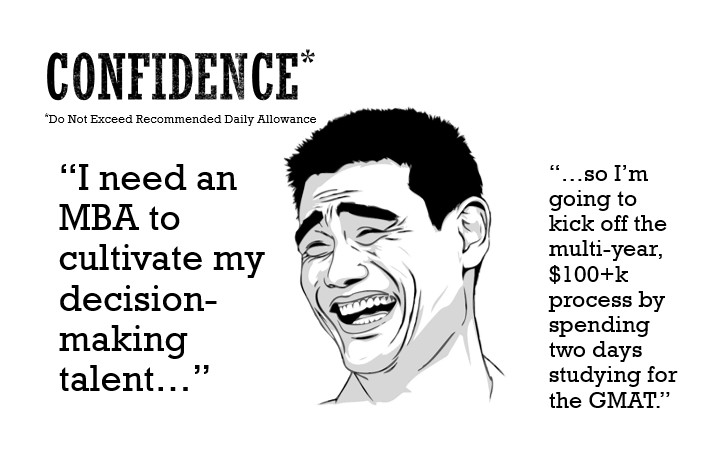 The personal story: as you might imagine of someone who has made a profession of standardized testing, standardized tests have come pretty easily to me in the past. In high school I took the SAT without studying and scored a 1590 (on the old 1600 scale), so when I got to the GMAT, I studied for only about two days. I was shooting for 99th percentile, but ended up with only a 720 the first time, 95th percentile. The GMAT felt harder, because it was adaptive and had a bank of challenging questions at the top. But that sensation of greater challenge wasn’t actually the reason why I scored 95th percentile rather than 99th. The reality there – one which you will face on the GMAT, regardless of your starting and finishing level – is that I was trying to be 99th percentile of a smaller, wiser, and more motivated group of test-takers. While the GMAT does tend to attract people with varying levels of comfort on the test, you can imagine somewhat fairly that GMAT test takers are something like the top 20% of SAT test takers. You could have, for example, an absolute performance of 95/100 on some imaginary scale on both tests and be 95th percentile on the SAT and only 75th percentile on the GMAT. There is also the fact that the GMAT involves worldwide competition – much more so than the SAT and many other tests – It’s not about how easy or hard the test is; it’s about how you do relative to the population of test takers. Anyway, to finish the personal story, I did end up making a thorough study of the GMAT and retaking it and obtaining a 770, which is 99th percentile.

And now, a few factoids:

To recap, I recommend that you allot between 2 weeks and 2 months for GMAT preparation. This window matches fairly well with other sources of experience. Most test prep companies suggest 2-3 months, which I think is reasonable advice for an audience of people already disposed to pay for a test prep course. Meanwhile, some individuals, with the charming bluster for which MBAs are infamous, claim that they personally nailed the GMAT with zero preparation. While there is data admitting of some such cases from the official sources, there is also plenty of data from abundant sources indicating that MBAs tend to be full of hot air.

The good news is that you can get a sense of GMAT questions by diving into this free course. Be sure, above all, to try Data Sufficiency questions. And in the upcoming chapters, we’ll get more detailed about planning for the process.