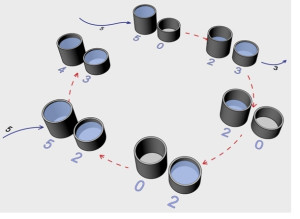 The GMAT exam is a key component of your business school application, and one of the best ways to start preparing for the GMAT is to try some GMAT sample questions.

On this page, you’ll see every question type that goes into your GMAT Total Score of 200-800 points. You’ll get an initial sense of your “favorites.” The least-liked question types tend to be Data Sufficiency, on the Quant section, and Reading Comprehension, on Verbal section, although the grammar involved in Sentence Correction question is daunting to some test takers. Just remember that any area of difficulty on the test is an area where you can carve out an advantage. What’s relevant to your GMAT score and your MBA application isn’t how easy or hard the test feels, but how your relative performance.

For that reason, and because everyone has room to improve on the GMAT, don’t attempt to evaluate yourself based just on these sample questions. If your GMAT ability could be gauged in a mere 10 or 12 questions, the GMAT would be only 10 or 12 questions long!

Running at the same constant rate, 6 identical machines can produce a total of 33 widgets per hour. At this rate, how many widgets could 14 such machines produce in 3 hours?

Here are a few more Problem Solving sample questions. This is merely a slice of the hundreds of free questions available to you on GMAT Free:

(1) The amount of water initially in the reservoir is 1800 gallons.

A) Statement (1) ALONE is sufficient, but statement (2) alone is not sufficient.

B) Statement (2) ALONE is sufficient, but statement (1) alone is not sufficient.

C) BOTH statements TOGETHER are sufficient, but NEITHER statement ALONE is sufficient.

D) EACH statement ALONE is sufficient.

E) Statements (1) and (2) TOGETHER are NOT sufficient.

Data Sufficiency questions are unique to the GMAT. Data Sufficiency is the other question type on the Quant section of the GMAT exam, and it represents the test-taker’s leading opportunity to gain a score advantage over the competition (or suffer a disadvantage). Data Sufficiency questions always have two data statements, labeled (1) and (2), and the answer choices are always identical to the answer choices in this sample question. The format is not overly complicated once you get used to it, but there is plenty of room for test-taking strategy in this question type.

Investigations along the Solo river in Indonesia have led some archeologists to debunk the idea of an era in which Homo Erectus had still survived in then Homo Sapiens’ inhabited areas.

Recently, scientists determined that great white sharks can live over 70 years, much longer than had been previously thought. They made the discovery by examining the layers of different colors that accumulated on the shark’s teeth over the years. In the 1950s, atomic bomb testing produced unusually large amounts of carbon-14, which fell from the atmosphere into the ocean and accumulated as a distinctive layer on the shark’s teeth corresponding to a known period in time. Perplexingly, even though great white sharks live longer than had been expected, some parties maintain that based on the new findings, the great white sharks must be protected from overfishing.

Which of the following, if true, best resolves the discrepancy identified above?

A) Great white sharks need to be protected from overfishing because they are dying rapidly due to poisoning by carbon-14.

B) Great white sharks were determined to live longer than had been previously thought based on the discovery of a carbon-14-rich layer within older sharks’ teeth.

C) Great white sharks are evidently endangered and therefore need to be protected from overfishing.

D) Some great white sharks may have rich layers of carbon-14 from other sources, depending on their migration patterns.

This question, like all Critical Reasoning questions, is designed to test logical reasoning skills based on a short “prompt,” which is typically a logical argument or a proposed plan of action. Of the question types that appear on the Verbal section, Critical Reasoning is the medium-length type, since Reading Comprehension questions require digesting an entire passage before getting to the questions. Critical Reasoning questions are an important area of practice for the GMAT exam, one that is often underestimated. Many people take for granted that they will have to brush up on mathematics skills, but they think of Verbal skills as innate and not subject to improvement. This is not the case! As you practice more Critical Reasoning, you’ll find your speed and accuracy improving.

Reading Comprehension are best viewed in a realistic interface with passage and question side by side, so for these practice question we will point you straight inside the GMAT Free course (no registration is required; you can click on through). To avoid rushing, you’ll want to allocate 10 or 15 minutes per passage. With practice, you’ll generally digest a Reading Comprehension passage in about 4 minutes and then spend 1-2 minutes per question.

GMAT Reading Comprehension passages are often a single paragraph, although passages of three to four paragraphs are also common. Reading Comprehension represents the GMAT test area that is most difficult to improve quickly, since reading skills are acquired over a lifetime and not improved overnight. Nevertheless, improvement on this question type is possible and many of the techniques that we will cover for Critical Reasoning can also be applied to Reading Comprehension.

Don’t be discouraged if these samples are daunting – and, for that matter, don’t think you are done your GMAT preparation if you nailed them. A moderate level of confidence is in order if you are serious about applying to business school. From here, a good next step is to acquaint yourself with the GMAT exam. And, now that you have seen these GMAT sample questions, we do recommend that you register for free in the course to be able to access your accumulated question history.